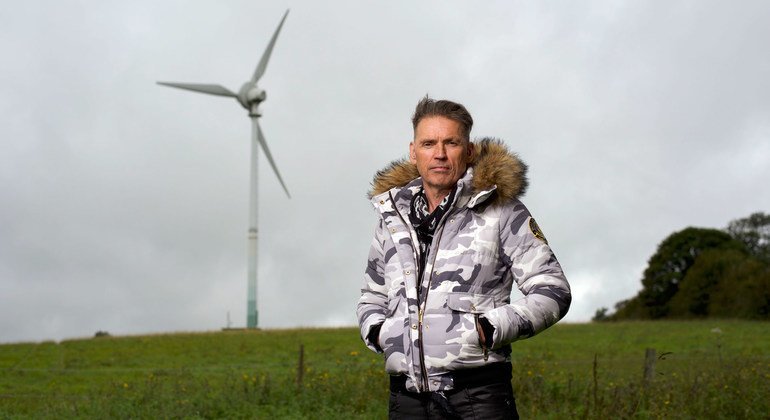 A football club in the west of England has been recognized by the United Nations for its leading role in setting goals to tackle climate change, from planning a low-carbon stadium to selling only 100 percent vegan food. Ahead of the kick-off  of the delayed Euro 2020 football competition, owner and chairman, Dale Vince, told UN News that the club aims to be a beacon of sustainability in the sporting world

“Forest Green Rovers began as a rescue mission for me in 2010. This 120-year-old club was facing closure and it happened to be located close to the town, Stroud, where I built Ecotricity, an energy company that aims to replace fossil fuels with sustainable green energy.

I’m a football fan so I thought I’d help out and just a day or so into owning the club, I started to recognize issues that really conflicted with my outlook and the way I lived. The first thing was red meat; we were serving beef lasagne to our players and I was horrified to find myself part of the trade-in meat which is so harmful to the environment. So, we stopped that. We then realized we had to change just about everything to create a green football club, something that had never been done before.

We identified energy, transport, and food as, biggest sources of carbon emissions in Britain which represent 80 percent of everybody’s personal carbon footprint.

Forest Green Rovers has pioneered a football kit made from recycled plastic and coffee grounds.

So, we made installed solar panels and now the entire club is powered by 100% green energy. We provided electric car-charging points for fans. The grass of our pitch is organic, it’s free from pesticides and weed killers and we collect rainwater to irrigate the pitch rather than using mains water. Our club strip is even made from a composite material consisting of recycled plastic and coffee grounds.

We have created space for nature around the stadium with eco-trails where people can learn about what we are trying to do in terms of improving biodiversity. Slow worms and orchids thrive in those areas!  Our modeling shows a 20 percent increase in biodiversity on the land around the stadium

Then there was the transition to a vegan menu. This was radical 10 years ago and so counterintuitive because football can be macho and seemed an unlikely bedfellow of veganism.

We get described as the world’s only vegan football club and that has been a monster in terms of PR, in terms of making an impact by getting our message around the world.

Our next step is to build the 5,000-capacity Eco Park, made entirely from wood which will be the greenest football stadium with the lowest carbon footprint in the world.  It’s not just a football stadium and training ground but a 100-acre sustainable development project which will include a green tech business park, new wetland restoration of a canal, and parkland containing 500 trees and 1.8km of hedgerows.

If you go back ten years, it was more expensive to be environmentally friendly than it is today. Solar panels were pricey and electric cars barely existed. Even plant-based food, which should be cheaper than meat, was more expensive.

I would say it’s a mistake to ask whether it makes financial sense to be sustainable. People often question how quickly will a solar panel pay for itself, but they never ask the same about their toaster, mobile phone, or car.

Looking at the big picture, even if it seems like it costs more on day one, it’s absolutely more economic in the long term to be sustainable because of the damage we are doing to the climate, wildlife, and habitats.

Forest Green Rovers has been recognized by the UN for its work on sustainability and climate action.

I think this club has to lead by example; that’s how we bring about change. There are four Premier League clubs and some big clubs in Europe as well that, like Forest Green Rovers, have joined the UN’s Sports for Climate Action initiative, which aims to get the global sports community to take action to counter climate change. I think it’s human nature to see what your peers are doing and to feel that you need to join in.
Businesses are also reacting to what people want in terms of products and outcomes. I think football fans themselves are lobbying their clubs to act and they point to Forest Green Rovers quite frequently as an example to follow.

Our fans don’t just tolerate this sustainability concept, they embrace it in a life-changing way. So many of them have told me their families have gone veggie or vegan, drive electric cars, and have solar panels at home.
In my experience just about everything I’ve focused on in my career can be done better if it is done differently. One of the keys is absolutely to start with a fresh approach.

I also think it’s so important to have fun. If people see you enjoying yourself, they can feel that in your messaging and they are more likely to listen.  I don’t talk doom and gloom; I talk about what we can do”.

Like Loading...
Tags:
Previous Article
BISHOP MICHAEL B. CURRY: Presiding Bishop of the Episcopal Church and First African American to be Elected to That Position
Next Article
Joanne Harris hails ‘writing as a force to be reckoned with’ as she introduces the winners of the 2021 Society of Authors’ Awards

Joanne Harris hails ‘writing as a force to be reckoned with’ as she introduces the winners of the 2021 Society of Authors’ Awards
Newsdesk 10 June 2021
© Copyright 2021. The European Times is a news provider trademark registered in Spain on behalf of FMVCS. FMVCS is a Madrid registered international non-profit Foundation, recognized with Special Consultative Status to the United Nations Economic and Social Council. Address: Calle Puerta de Abajo, 16, Oficina B, CP 28430 Alpedrete, Madrid.