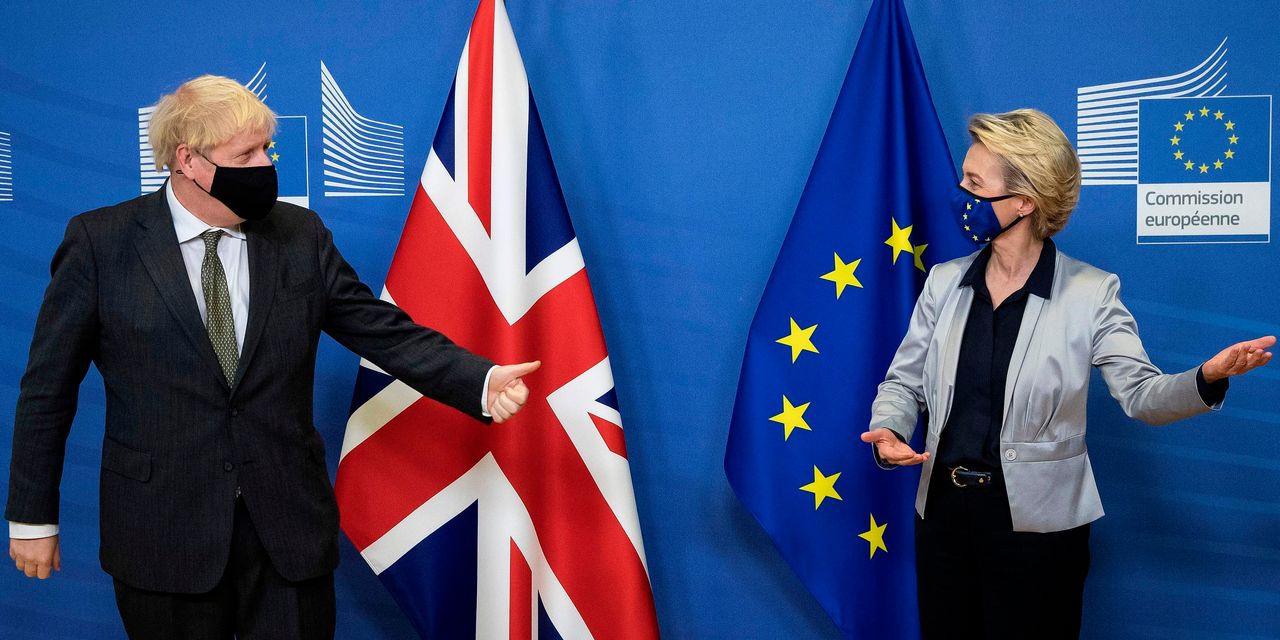 Four years and six months on from the referendum that defined an era of British politics, the U.K. and European Union have agreed to a historic new trade deal on Thursday to define their relationship after Brexit.

The U.K. will complete its final exit from the 27-member bloc on Jan. 1. A no-deal Brexit could have caused a market shock, hurting some investors and impacting both U.K. and European consumers and companies.

“We have finally found an agreement. It was a long and winding road, but we have got a good deal to show for it,” European Commission President Ursula von der Leyen said.

British Prime Minister Boris Johnson said that the U.K. “will be your friend, your ally, your supporter, and indeed never let it be forgotten, your number one market.”

He added that the deal, which comes into force on January 1, was the biggest trade deal signed by either side, covering trade worth £668bn in 2019 and guaranteeing tariff-free trade on most goods. Johnson said the deal will allow U.K. companies “to do even more business with our European friends.”

A key sticking point of the negotiations had been EU fishing rights in U.K. waters, but Johnson said that Britain will have “full control” of its waters for the first time since 1973.

Essential reading: A Brexit Trade Deal Has Finally Been Struck. Here’s What It Means for Markets and Investors.

The announcement on Thursday afternoon came later than expected, after what Ireland’s foreign minister Simon Coveney said was a “last-minute hitch” relating to language over fishing rights.

Johnson and von der Leyen had been in close contact over the past three days in a bid to strike a deal in time for ratification before the end of the year deadline.

Von der Leyen said that “competition in our single market will be fair, and remain so. The EU rules and standards will be respected. We have effective tools to react if fair competition is distorted and impacts our trade.” She added: “We will continue cooperating with the U.K. in all areas of mutual interest, for example in the fields of climate change, energy, security, and transport. Together, we still achieve more than we do apart.” Johnson said that “beating COVID is our number one priority and I wanted to end any uncertainty and give the country the best possible chance of bouncing back next year.” The U.K. left the EU on Jan. 31 but the two sides had to reach a deal over their future trading relationship before the transition period ends at the end of this year. A post-Brexit deal drew a line under nine months of protracted negotiations and multiple missed deadlines. EU member states will now have to ratify around 2,000 pages of legal text. The EU’s chief negotiator for Brexit, Michel Barnier, said that “the clock is no longer ticking.” Barnier added that the EU has shown unity and solidarity, and said that the deal will now be put to the European Council. Markets have largely priced in a deal on the future trading relationship between the U.K. and the EU because the two sides have previously left making concessions until the last minute. More on markets: Pound dips slightly as U.K. and EU reach Brexit trade deal Fishing rights were the last sticking point in a deal apparently 2,000 pages long. While it was in the bloc, Britain had to share its waters with fishermen from countries including France and the Netherlands. The EU’s fishing rights in U.K. waters are currently worth more than $790 million each year. “We have secured 5½ years of full predictability for our fishing communities, and strong tools to incentivize to remain so,” von der Leyen said. Scotland’s First Minister, Nicola Sturgeon, said in a tweet that “this is a disastrous Brexit outcome for Scottish farmers…and like all other aspects of Brexit, foisted on Scotland against our will.” Taoiseach Micheál Martin, Ireland’s prime minister, said the deal is very welcome after four long years of negotiations. Analysts are mixed on how a Brexit deal will affect markets in the long term. Expectations are that the pound will strengthen against the dollar, potentially lifting oil prices, and more appetite for risk among investors could even boost U.S. equities. “Markets should react positively to the news that a deal has been reached,” said Seema Shah, strategist at Principal Global Investors. “The cleaning up of this endless saga will provide relief to Brexit-weary investors and the public alike,” Shah said. “While Sterling will enjoy a bounce, there is no escaping that the deal agreed will not protect the UK economy from some form of economic disruption next year which will only add to the deep economic scarring already inflicted by COVID-19.” Plus: U.K. ETFs jump as Brexit deal is finalized Sterling GBPUSD, continued its rally against the dollar in the hours before the deal was announced, trading near 2½-year highs. Shortly after the deal was announced the pound dipped slightly to $1.3537, having hit $1.36 earlier in the day. Markets on either side of the English Channel eagerly awaited the deal, which covers goods and issues around borders, but not the bulk of the services sector that is crucial to Britain’s economy. SYZ Private Banking chief economist Adrien Pichoud said the deal could end up boosting cyclical stocks. “Combined with positive news around the roll-out of Covid-19 vaccines, a Brexit deal will boost markets and strengthen the reflationary environment we expect to prevail in the first half of 2021,” he said. “We believe the conditions are ripe for a coordinated acceleration of global growth over the next three to six months, of which this is only the beginning. The temporary return of growth and inflation increases the potential for cyclical value names to outperform growth stocks over this period, and we have added cyclicality to our portfolios through a global value ETF,” Pichoud added.
Facebook Comments