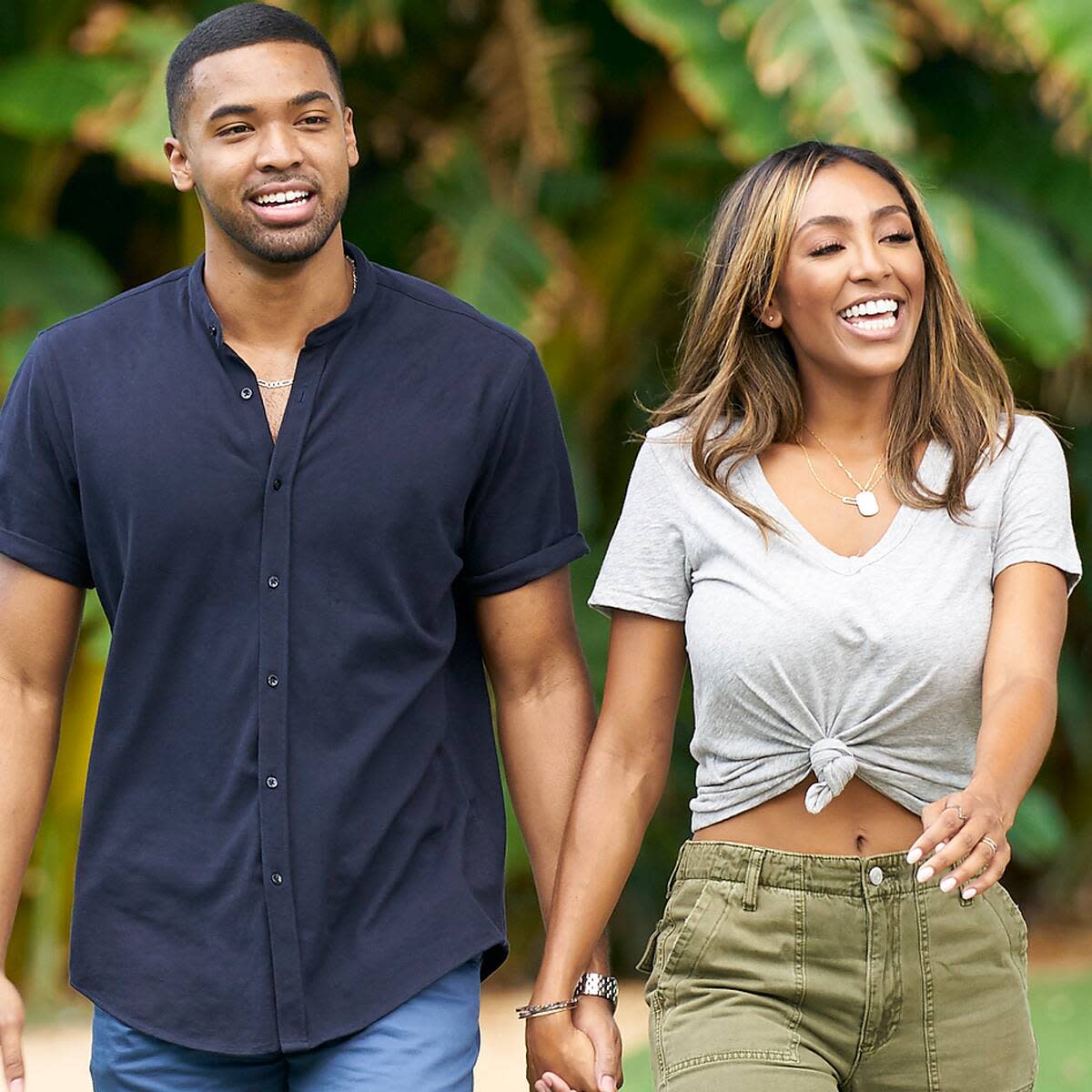 Tayshia Adams just wasn’t down for an interfaith relationship. At least, that’s what Ivan Hall claims was the reason the pair didn’t work out on The Bachelorette.

During Tuesday night’s season finale, fans were surprised when the Bachelorette suddenly revealed that “morals and my beliefs” came between them, as she instead accepted Zac Clark‘s proposal.

Ivan told Tayshia onscreen, “All the girls I have dated in the past, it never ended because of religion or anything, but I know that’s something that’s important to you.”

Viewers hadn’t seen the duo explicitly talk about their religious views before. So when they simply mentioned it was the deal breaker that ultimately swayed her decision, we needed to know what really went down.

Fortunately for fans, Ivan is now spilling the tea on what happened during their off-screen conversation and how he learned that religion was the major barrier between the ABC stars.

Behind the Scenes Secrets About Tayshia Adams’ Style on The Bachelorette

On PodcastOne’s Off The Vine podcast on Wednesday, Dec. 23, Ivan explained that the fantasy suites were their one opportunity to have hours of uninterrupted time to discuss raising kids and other life priorities. It turns out, religion got brought up then, as well.

The Texan revealed, “I knew we were going to have to talk about it eventually, because I could tell she was at least, that she was Christian, but we hadn’t talked about it in the past. But she said maybe once to me that she relied on her faith a lot.”

Ivan went on, “That’s how it came up, Tayshia was like, ‘So what do you think about raising kids with religion and what not?’ And that’s when we dove into it. And I kind of explained to Tayshia, ‘Listen, I’m agnostic. A lot of people confuse it for being atheist. Atheist is not what I am.'”

He views atheism as “taking a hard stance that there is not God,” which is not his belief. “Agnostic is strictly saying ‘I don’t know,’ basically. And that’s just how I feel,” he explained.

The aeronautical engineer continued, “When she starts asking me my beliefs like, ‘Is there heaven or is there a hell?’ that kind of stuff, I’m going to be like, ‘Yeah, my answer is going to be different than yours because I’m going to tell our kids I don’t know what there is.'”

Ivan told his date he was “completely fine” with her telling their potential children about her views and taking them to church.

It appears that’s where things may have differed between him and the 30-year-old former phlebotomist. He said on the podcast, “She wanted to date someone who is Christian. And that’s completely fine and that’s how a lot of people are.”

However, he hinted that it would have been easier for everyone involved if she would have been more upfront about it. Ivan dished, “It does suck or whatever that you probably could’ve just eliminated X amount of people in the beginning for that.”

The 28-year-old went on to say that when he brought up the term “interfaith relationship” when discussing their future, the Bachelor in Paradise alum didn’t understand what he meant. “I don’t think Tayshia even knew what that was or ever really thought about the idea of dating a non-Christian,” he explained.

Though he thinks interfaith relationships bring a lot of “value” to a dynamic, he feels that Tayshia was just “not into” it.

Furthermore, he wasn’t down to be with a life partner that didn’t “accept me for just who I am,” because he never wants to change himself for someone else. “I don’t really want to be with that person anyways. So that’s kind of how I rationalized it in my head,” he said.

It seems like it’s all water under the bridge now. As the science whiz put it, “The chapter is closed. It just is what it is. I still care for Tayshia, she’s cool, all that stuff. We had a good time.”

In the end, he’s happy she ended up with Zac. “He’s a great guy, I really do like him. I really appreciated the guys in the house that I considered to be real and didn’t do stuff for the camera,” Ivan continued. “He’s a class act. He’s a man, I respect the guy to death.”

The Filipino hunk said that Zac and Tayshia “had a ton of chemistry going on, and I didn’t realize that.”

He admitted that from the outside looking in on their relationship, “I guess one would question their lifestyles are on opposite coasts.” As Ivan pointed out, “He’s sober, it seemed like Tayshia honestly liked to drink… I don’t know how that plays into it.”

But he also gave Zac some credit, saying, “I know for certain, I could tell, that Zac was in love with Tayshia. Like, before all of us he was there first and he’s a great guy and he’s going to treat her right.” Ivan added, “I wish them the best though.”

How do Tayshia’s other men feel about her engagement? See what fellow runner up Ben Smith said during his candid conversation with Nick Viall on Wednesday.