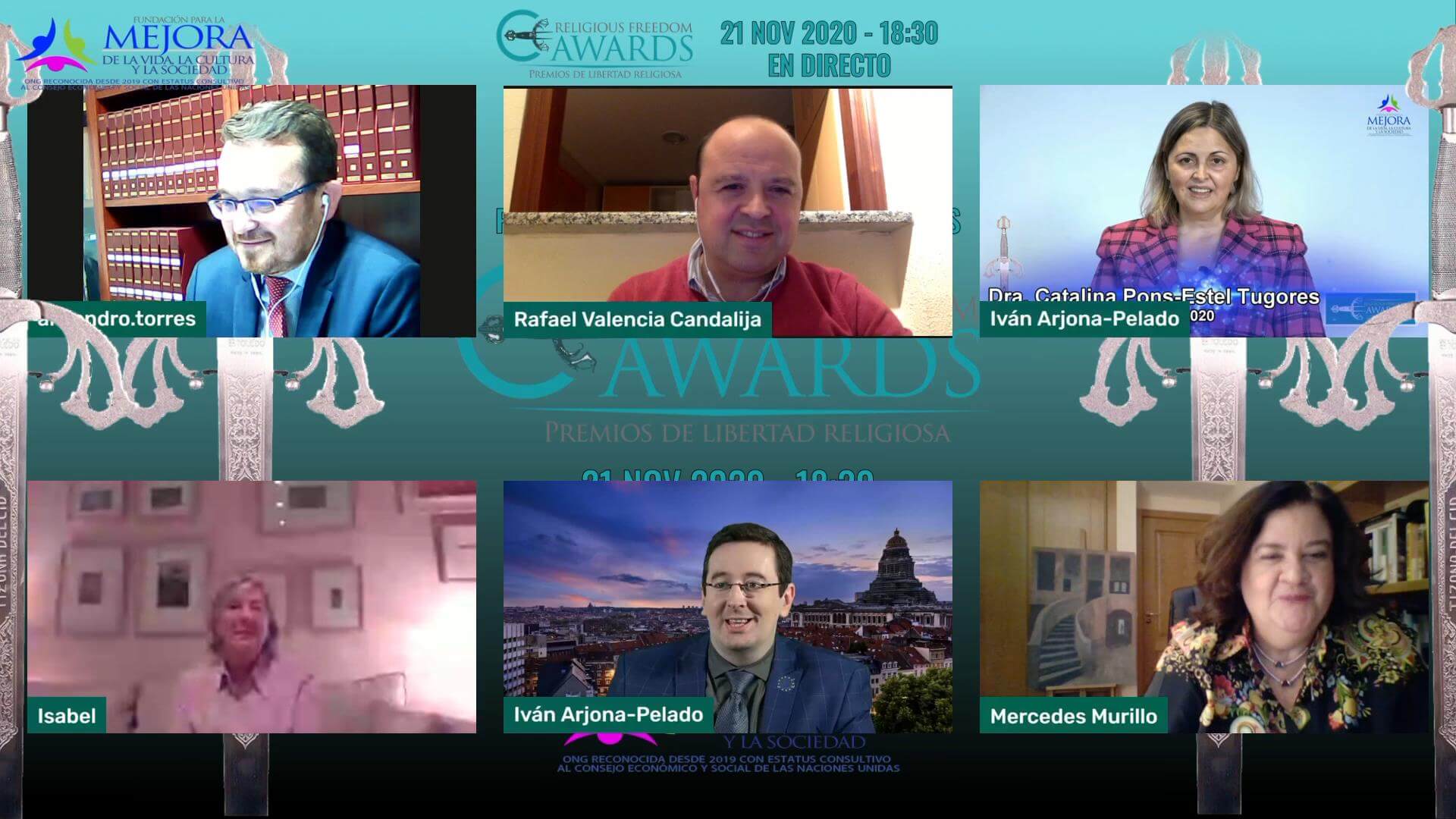 The Church of Scientology Foundation for the Improvement of Life, Culture and Society, in consultative status with the United Nations since 2019, presented the Religious Freedom Awards, in the form of a Tizona sword, to Prof. Dr. Alejandro Torres, Prof. Dr. Rafael Valencia and Prof. Dr. Catalina Pons-Estel, in an online ceremony attended by Prof. Dr. Mercedes Murillo, Director of Religious Freedom of the Spain’s Ministry of Presidency (Prime Minister’s Office).

The ceremony, inaugurated by Ivan Arjona, President of the European Office of the Church of Scientology for Public Affairs and Human Rights, and Isabel Ayuso, Secretary General of the Mejora Foundation, began with the viewing of two videos regarding the right to freedom of thought, religion and conscience (one of them based on the works of L. Ron Hubbard‘s book “The Way to Happiness”), as well as a music video by international artists such as Chick Corea with a message of “Spread a Smile and not something else”, very suitable for the times of health crisis that are being experienced worldwide.

Following this, Mercedes Murillo, Director of Religious Liberty for the Ministry of the Presidency, addressed the award winners and attendees at this online ceremony, saying, “Once again this year the Church of Scientology Foundation is presenting its Religious Freedom Awards, a pioneering initiative, and so it is also appropriate for another year to recognize and appreciate this opportunity to bring together people concerned about this right around the world“

Murillo continued by saying “we are meeting this afternoon to present some well-deserved awards to three recognized specialists in this field whom I would like to congratulate” words after which the master of ceremonies went on to present the winners, who personally thanked the Fundación Mejora, of the Church of Scientology, for the award received and for the initiative that seeks to encourage people to promote and defend freedom of conscience .

Isabel Ayuso, Secretary General of Foundation, in her presentation said of these awardees that “they are the heroes of our times”…”they have changed the battleground for the classroom, the swords for the quill… on a real battle for freedom”

The first winner of the celebration was Prof. Dr. Alejandro Torres Gutiérrez, Full Professor of Law at the Public University of Navarra with an incredible production of publications and professor in the field of religious freedom. His publications are focused on the study of the financing and tax system of religious denominations, models of Church-State relations in Spain, Austria, Portugal and France, the status of minorities and multiculturalism in the United States, Canada and Austria. In his acceptance speech he left, among other messages, messages such as “the study of freedom of conscience is still relevant because we should not have fewer rights as a result of being less”… “in a society like ours in which there is still much violence for religious reasons I understand that the study of tolerance is important”… “the protection of diversity is key in a state like ours in which all possible interpretations of the universe have a place as long as they respect the ethical minimum of which we all participate in a democratic society”.

After which, Arjona gave the following Tizona to Prof. Dr. Rafael Valencia Candalija, currently Professor of Ecclesiastical Law at the University of Seville and that in addition to having opened religious diversity in Spain in a practical way to thousands of law students, will soon be publishing a book on Religious Freedom in Football, a pioneering prism in the field. Prof. Valencia said at the ceremony that “there is no prize today for an professor of religious freedom law giving a greater hope and joy as a recognition for protecting religious freedom” … ” we must continue to fight, therefore we must continue to work in defense of religious freedom … for those situations that violate this great right that occupies us and above all, we must continue to seek and continue to establish proposals for a better protection of the good, that is our work, and that should be our mission“.

And in this 2020, 40th Anniversary of the Law of Religious Freedom, could not miss an award for Prof. Dr. Catalina Pons-Estel Tugores, from the University of the Balearic Islands, who in addition to teaching this subject since 1997, this year has completed a series of lectures reviewing and commenting on the current Spanish law with the vision of both minor and major religious entities, as well as professionals in the field both scholars and government officials, which she has brought to the general public in addition to classrooms. In her acceptance speech, Prof. Pons-Estel explained that “religious freedom is a very current subject, a subject that is very much alive and close to all citizens” … “although we have all taken for granted the importance of the fundamental right of religious freedom, in these times in which everything seems to be in crisis, it never hurts to remember the importance of these rights that have cost us so much to achieve and guarantee”.

The ceremony was recorded online and can be accessed on the Foundation’s social networks and HERE.

The event also had space for a statement by the Director of Religious Freedom of the Ministry of the Presidency, to remind citizens about the current health situation: “I would like to take this opportunity to recognize the responsibility that all religious entities have had in this situation to limit their various forms of worship and replace them with other ways of providing spiritual care to their faithful … Therefore, I appreciate this task that they have been developing and that has not only maintained the possibility of meeting those who share their beliefs, but also in a difficult situation I know that all have maintained their solidarity activities towards the most vulnerable”.