“For places such as Kosovo, still suffering the consequences of past conflict, cooperation, unity of political voice and vision, dialogue and preventing extreme polarization should be the highest order priorities”, Zahir Tanin, head of the United Nations Interim Administration Mission in Kosovo (UNMIK), told the 15-member organ.

Such solidarity, especially during the current pandemic, should focus intensively on attaining the difficult balance between public health, economic recovery and human rights – “a conundrum presently defying Governments the world over,” Mr. Tanin said.

SRSG Tanin concluded his remarks at #UNSC session on #Kosovo by reiterating UNMIK’s unqualified commitment to supporting the EU-facilitated dialogue and the efforts of leaders on both sides to move decisively towards a comprehensive agreement and long-term peace & reconciliation.

Kosovo, which has an ethnic-Albanian majority, broke away from Serbia in a bloody conflict which began in 1998, with the Security Council authorizing temporary administrative powers to the UN, in 1999.

Kosovo unilaterally declared independence a decade later, backed by the United States and United Kingdom, among others. But Serbia, backed diplomatically by Russia, has never accepted the split, and Kosovo has not achieved full member status at the United Nations.

Mr. Tanin, discussing the Secretary-General’s latest report on UNMIK,  said that the COVID-19 crisis in Kosovo has gone through different phases, from stringent measures and lockdowns towards a more relaxed approach aimed at economy recovery, as a new government led by Prime Minister Avdullah Hoti took the reins in June.

Despite insufficient capacity to deal with a pandemic, Kosovo’s healthcare system – and frontline health workers in particular – worked heroically to make the best use of limited resources.  The socio-economic consequences have been severe, however, with the psychological fallout also widely felt across society, he said.

For the UN presence in Kosovo, the focus on directly helping people, institutions and communities in the framework of the Mission’s strategic support for dialogue and trust-building, amid reports of a growing number of security incidents against vulnerable and non-majority communities as well as significant increases in domestic violence and violence against children, he said.

News reports in Kosovo, citing local health authorities, on Wednesday put the number of active COVID-19 cases at 1,944, with the highest number of new cases in Pristina municipality. 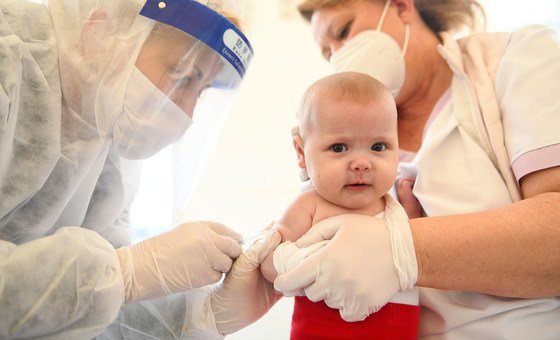 On relations between Pristina and Belgrade, Mr. Tanin commended the two sides for resuming negotiations – after Kosovo lifted 100 per cent import tariffs on goods from Serbia – and called on them to pursue a process of constructive dialogue.

Recent meetings in Brussels and Washington demonstrated the potential for progress when international resources and leadership on the ground come together to move difficult issues forward, he said.

“Of course, the most important conditions to be met in order for negotiations to succeed are political unity, strong commitment and goodwill among leaders, both in Pristina and in Belgrade, and sustained international support,” he said.

It is unfortunate, he said, that some political leaders “did not always help to rectify false narratives” – including by attempting to question the legitimacy of the Specialist Chambers – after the Specialist Prosecutor’s Office said in June that it was filing indictments against President Hashim Thaçi, among others.

Three individuals now re in pre-trial detention, with one facing war crimes charges and the other two held on suspicion of intimidation, retaliation, violating the secrecy of proceedings and unlawful disclosure of protected information, following the publication of allegedly leaked prosecution-related documents.

Mr. Thaçi, a former leader of the Kosovo Liberation Army who went on to become Kosovo’s first prime minister after its 2008 declaration of independence, has indicated that he will step down from office if and when his indictment is publicly confirmed by pre-trial judges, Mr. Tanin said.

Keeping an eye on the grain market – November 4 update

Keeping an eye on the grain market – November 4 update